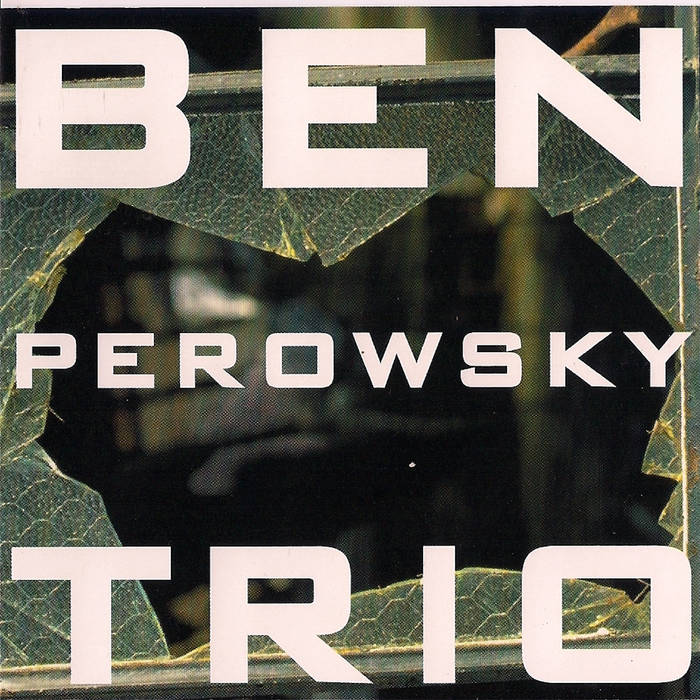 Reviews:
"Drummer Ben Perowsky brings so much depth and versatility to the kit that he's been a sideman of choice for an astonishing variety of players. In the past few years, Perowsky has played on Dave Douglas' Magic Triangle, Pat Martino's All Sides Now, Mike Stern's Play , and Salif Keita's Papa while also performing with Uri Caine's Mahler project, Don Byron's Bug Music, and the fusion quartet Lost Tribe. There's also the indie rock band Elysian Fields, and dub/electronica group Liminal, and a straight ahead jazz quartet led by his sax-playing father, Frank. But by far the most expressive outlet for his very melodic, Tony Williams-inspired approach to the kit remains the Ben Perowsky Trio. Formed in 1997 for a weekly engagement at the Knitting Factory's Tap Room, the BP Trio has developed into a vehicle for the drummer's open-ended writing. And with empathetic bassist Scott Colley and saxophonist Chris Speed on board, the music takes on a highly conversational flow, as heard on the group's self-titled debut on Jazz Key Music. A role model for the trio, Ben explains, was Sonny Rollins' A Night at the Vanguard recordings with Wilber Ware and Elvin Jones. "All three of us grew up listening to those records," says Perowsky, "But actually, my own roots go back to Led Zeppelin, Jimi Hendrix, and Pink Floyd." Which explains the presence of Floyd's "Money" as the closing track, done up in a loose grooving, freeblowing fashion. Elsewhere, Perowsky demonstrates a lyrical touch with brushes on his "Electric Sheep" and a decidedly Elvin-esque way with mallets on Ellington's In a Sentimental Mood. He swings frenetically on Bird's Segment and offers up a take on Messiaen. Granted, thats covering alot of ground, but it's still not revealing the full picture. "I didn't want to bring all my bags into one project," says Perowsky. "There isn't really one band that I could play all the different styles in. And more and more, the different bands don't bleed into each other stylistically as much as they used to. So now I'm just going for whatever the music is dictating."
Bill Milkowski (JazzTimes11/99 )

"The drummer's self - titled trio album (jazzkey) is a success with Chris Speed's saxophone and clarinet well focused by the compositions and Scott Colley's bass holding the ground, all of which bodes well for these live trio sets."
Gary Giddens (Village Voice 7/13/99)


"Color can be a rhythmic impetus just as much as "regular" cadences can, and this versatile drummer finds ways to incorporate the two. The result is a rainbow full of vim. His B.P. Trio - with Scott Colley and Chris Speed, agile improvisers who realize that pressure can be pretty - has a nifty new disc that underwrites cooperation at every turn."
Jim Macnie (Village Voice 9/7/99)

"The drummers self-titled trio album (jazzkey) is one I find myself returning to, an openhearted an convincing jaunt in which the compositions bring out the best in the gited saxophonist and clarinetist Chris Speed, which Scott Colley's bass holds."
Gary Giddens (Village Voice 9/21/99)


Ben Perowsky Trio, (JazzKey Music, Ltd.)
"Three of the most talented sidemen in the business appear on drummer Ben Perowsky's debut as a leader. Recorded live at the Knitting Factory during this group's weekly series of gigs in 1997 and 1998 (complete with the clinking of glasses and the dull roar of background noise) this release documents the group tackling original material mixed with covers of Bird, Ellington, even Roger Waters.
The result is an exciting, sometimes tongue-in-cheek, approach combining inflections of drum-n-bass and groove with wide-open tunes providing plenty of room for improvisation. The interplay between Perowsky and bassist Scott Colley clearly exhibits their decade long collaboration, as tenor sax and clarinet player Chris Speed takes the melody spotlight and extended space and soloing opportunities in stride, completing the circle begun by the partners in rhythm.
The three Perowsky-penned originals are all excellent. Both the opener "El Destructo" and "Janitor" employ entrancing and often groovy bass riffs from Colley. The latter has Perowsky opening the piece with a Mitch Mitchellesque drum intro that sets the tone from the get-go, making this tune the highlight of the set. "Electric Sheep" turns the knob to slow boil while the group composed "Pixy 99" sounds like something from the MMW repertoire, with Speed imitating arco bass by blowing air through his tenor. As for the covers, the small group dynamic favors Bird's "Segment" and Perowsky's arrangement somehow makes Messiaen's "Danse Du La Fureur Pour Les Sept Trompettes" seem like a natural choice. Ten minutes of "In a Sentimental Mood" seems a little much, as does eight minutes of Pink Floyd's "Money, though both certainly have their moments.
Overall, this album does two important things very well. It is an authentically documented time and place with a great group and it leaves us wanting more -- particularly more Perowsky compositions. We can only hope the success of this disc will give the powers-that-be the impetus to allow this long-time sideman the opportunity to flex more of his muscles as a leader."
Scott Menhinick for Signal to Noise

Drummer Ben Perowsky’s notable career has placed him among a small vanguard of players able to move between jazz, experimental music and cutting edge pop and rock. His extensive list of credits and collaborators can be seen on his website: perowsky.com

Bandcamp Daily  your guide to the world of Bandcamp

Featured sounds by K.Spark and WIZDUMB, plus Basi joins the show to discuss his latest release.